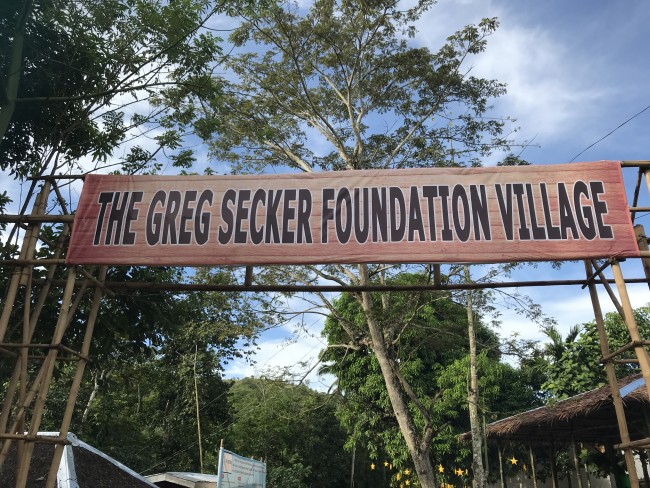 Why I fell in love with the GSF village …

Before the opening ceremony, my son Josh, Dean Russell and I were privileged to be in the village for a few days …. 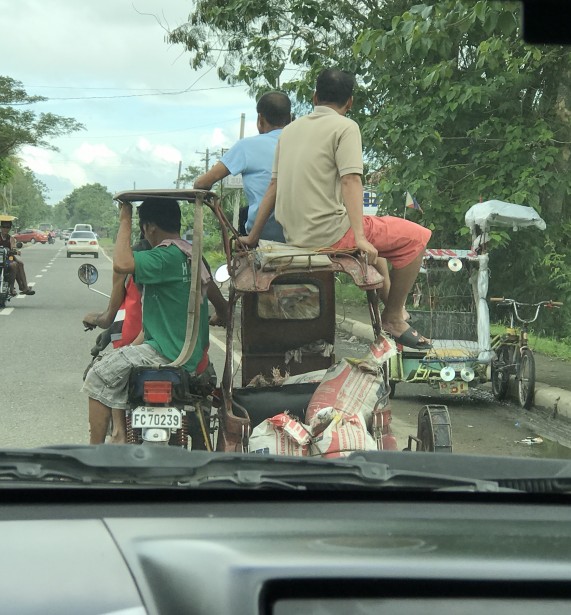 Rosario and Norman picked us up from Iloilo City and we headed out of the city and into the countryside. It was breathtaking driving along the roads – not only because it is so beautiful but also because of the risks that people take! There are so many motorbikes, trucks, buses, jeepney’s, people, water buffalo, dogs, all on the road at the same time and you have to negotiate your way through them letting each person know that you are coming through with a little beep. 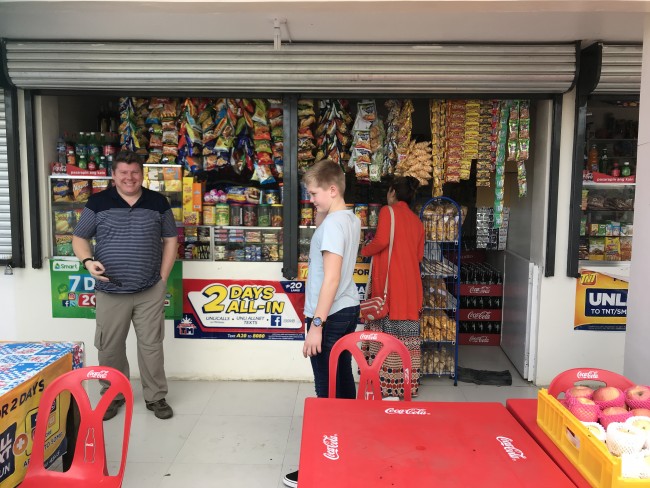 After an hour or so, Norman and Rosario stopped at a bus stop for us to grab some water and crisps – they had some native Filipino delicacies for sale – ‘Balut’ eggs which Norman was trying to make us try?! We gave it a miss but I am assured that a developing bird embryo with a beer is a must! Maybe next time??  With a nice healthy packet of crisps and a coke in hand we set off again leaving the flat land of rice paddy fields and into the hills. 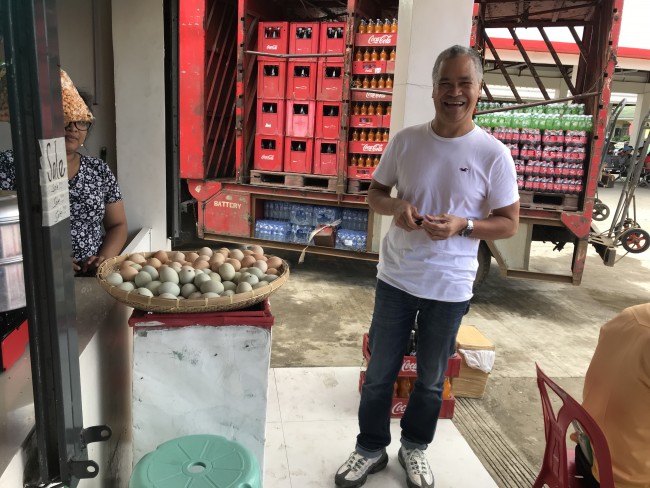 The landscape was so green – the hills covered in palm trees and maize that had been planted by the farmers – it was looking more like the jungle. We soon arrived into Lemery which is the nearest town to the GSF village. It was market day and the town seemed really busy with people everywhere, carrying chickens, bags of vegetables and all sorts of other delicious looking foods. 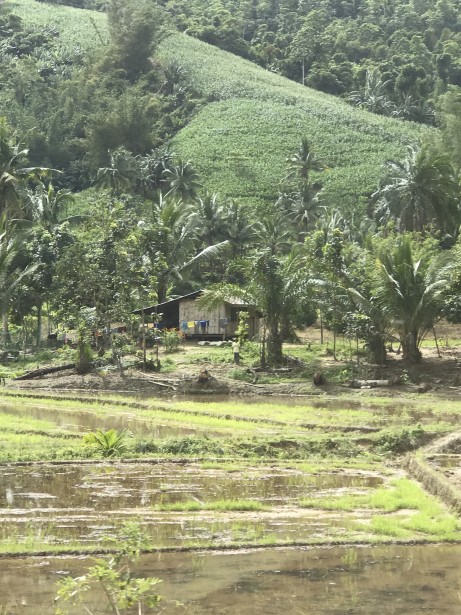 Rosario was telling us that since she had been here, (she landed on 16 December) that they had had three Typhoons. For this time of year it is not usual and it has made life very difficult in the village to get things ready for the big day. The road into the village was un passable unless by motorbike or foot, which has meant that supplies have been unable to get in. Today, we were lucky as we were in a 4×4 pick up and even that was finding it hard work. We slipped and slided and at one stage I thought, hear we go, time to hop out and push!  Rosario had managed to get the local contractors to help and already there was a grader on the track trying to level the mud out. I will be honest, at this time, I actually thought – how on earth are we going to get everyone into the village?  Looking out of the window of the pick up – black clouds looming in the hills – we really did not want any more rain. This road really does need to be properly constructed so that the villagers are able to get in and out for schooling, work, and day to day living. 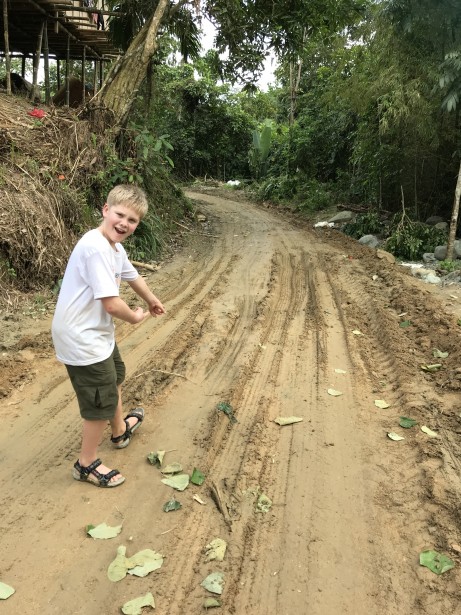 As we rounded the last corner of the dirt road, we arrived into the village. I have been writing about the village for a while now and to actually be here was breathtaking. This amazing village in the middle of nowhere – surrounded by jungle and maize plantations. What blows you away is that the village really is a village – it has concrete roads through the village – the houses are proper concrete typhoon resistant houses with electricity, running water and it is such a contrast to the shacks, (that are also houses), that I have just passed along the dirt road.  It is incredible to think that these houses have been built here by the construction team and the beneficiaries, and materials have come in along a road that honestly is not a road – it is a dirt track – that when it rains, and it does a lot here is completely un passable. It can not have been an easy job this last two years – I am in awe of everyone that has achieved what has been done here. 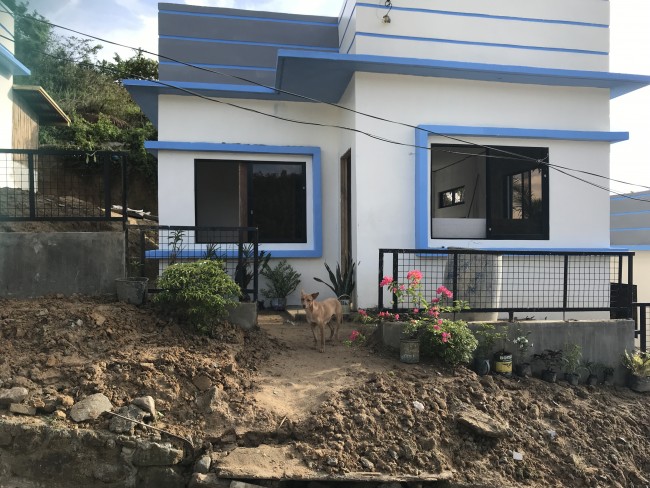 As we all hopped out of the pick up we were instantly hit by the humidity and heat – it was tropical heat and within five minutes we had all changed into shorts – flip flops and t-shirts.  Arriving in jeans was not such a good idea! 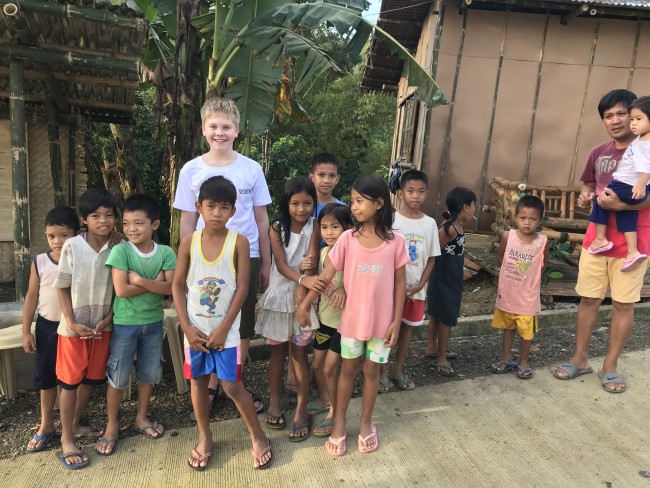 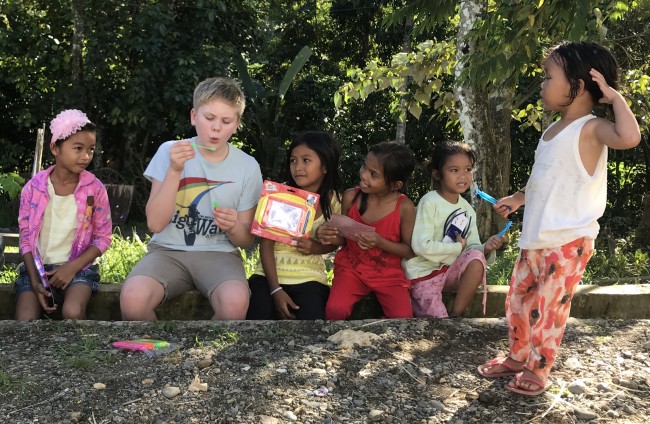 It wasn’t long before Josh had made friends with the children. Children are so much better at this than us adults.  He was playing IT, hide and seek, running races – all with limited conversation but just having fun. The children are beautiful, there is laughter, singing, squeals of happiness as you walk around, it is so nice to see them running around actually being children. No i-pads, x-boxes, PS4’s that keep them hidden behind closed doors and only focused on the screen in front of them. Maybe one day it will reach here but for now it was refreshing to see children being children. 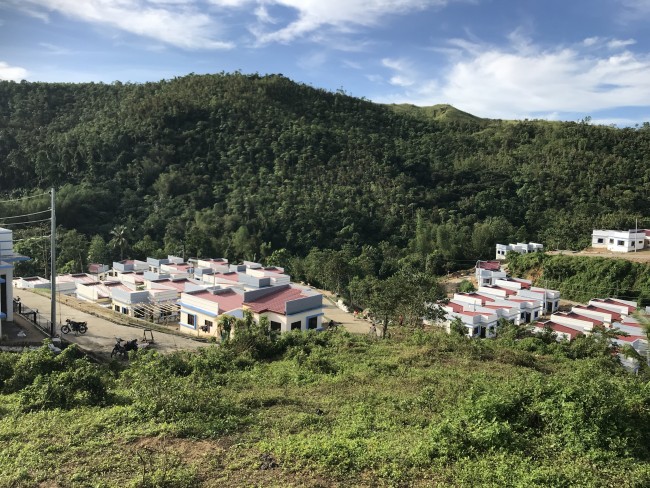 I ventured to the top of the village and this to me was the most special place. This is where the Training Centre (phase 2) will be built and to me, it is the best spot in the village.  It overlooks the whole village in front of you and as you turn around, you are surrounded by lush green jungle. It really takes your breath away – the noises of crickets, birds and actually a cow and calf were next me munching away too!  I could have stayed up here all day … but we had work to do! 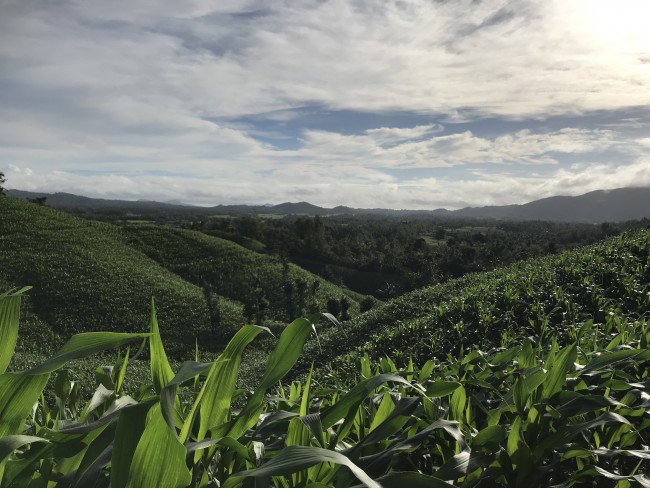 Once we had eaten some lunch, kindly cooked by Rosario, we had meetings with the film crew and event management team who were both getting ready for the 5th. 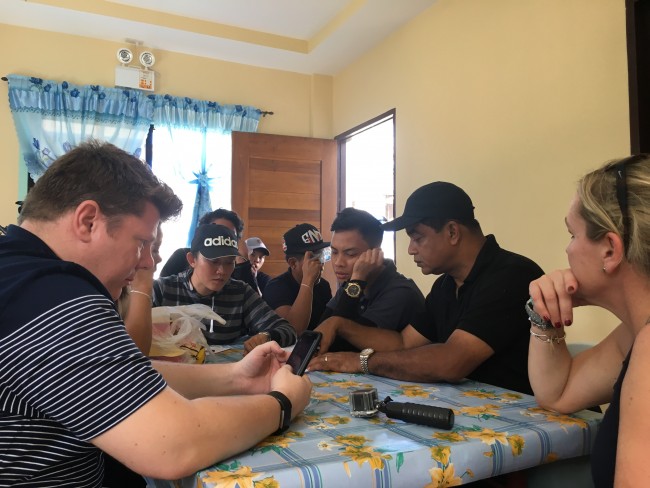 Walking around the village I passed fathers, mothers, children, and EVERYONE says, hello ma’am, umaga, hello, morning, kamusta, all smiling – they are just so friendly. I can think of places at home – I don’t even catch peoples eyes. The community spirit here in this village is something I really miss living in the UK. 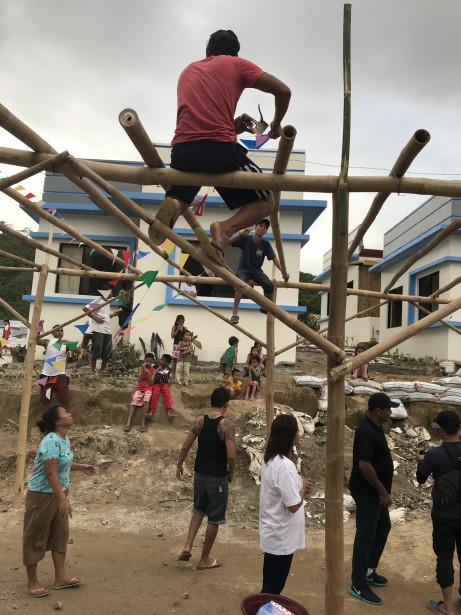 The fathers were busy finishing making their tables for their houses, creating  an area for eating in case it rains on the 5th, tidying up areas where construction materials had been, making signs, fixing the roads, making steps up to the training centre area and more – everyone was working and helping to get the village ready for the big day.  The mothers were tidying the gardens, every garden had its own definitive look with different flowers and plants. It was all looking good. 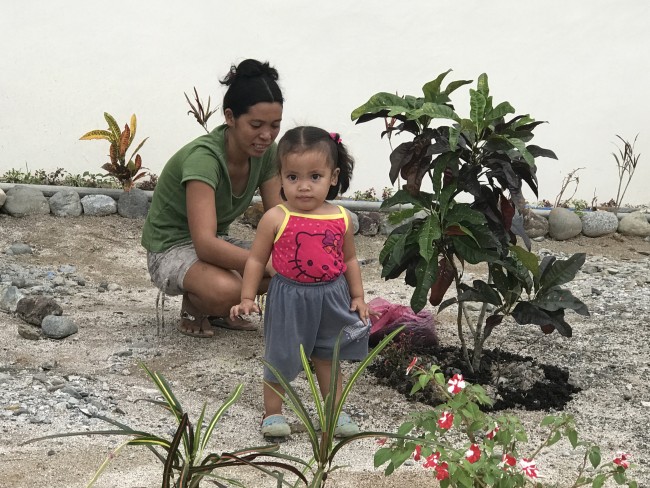 As the sun went down we headed into DR’s house for a well deserved beer – luckily no ‘Balut’ eggs in site!  Tomorrow is another day – the teams from the UK, SA and AUS arrive for a day of filming in the village.  Can’t wait to welcome them into the village – it feels like home to me. I love it here – the people are warm, welcoming and have so much love. 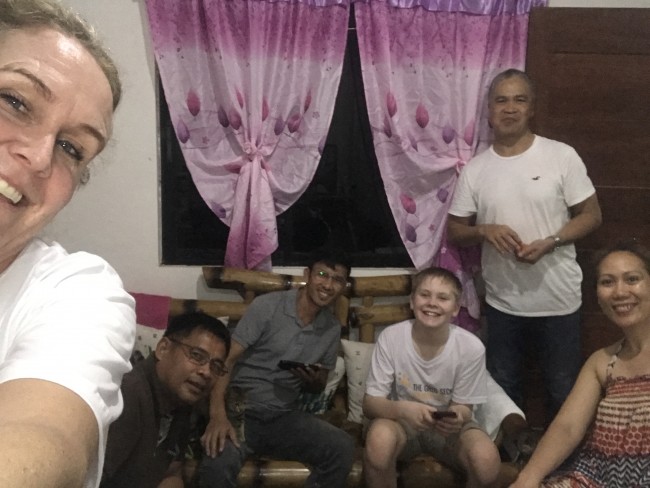 Sharing this page
The Opening Ceremony – 5th January 2018 Stevie Tajanlangit fulfils his promise to one of our beneficiaries, “Simo”!